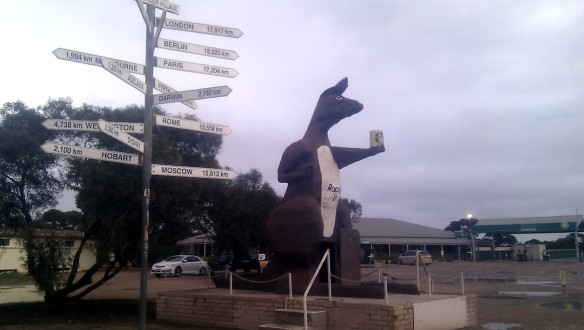 We left Border Village refreshed a little by the wet day off.

The shoulder vanished at the SA/WA border and the distance posts started counting up but we soon entered Nullarbor National Park and visited two lookouts over the Great Australian Bight. It was overcast but still beautiful.

Along the way we met a young doctor, Anton, originally from Perth but living in Tasmania, who was riding home for his grandfather’s 100th birthday. It was so much fun meeting other cyclists, checking out road conditions, gear and swapping tips on camping spots.

We finished the day (more northerlies) at the third Bunda Cliffs lookout with waves crashing, whales frolicking, a 360o sunset and wind straight off the Southern Ocean. 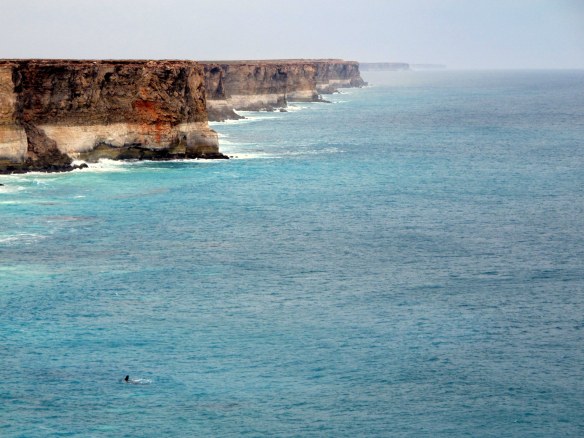 We pitched our tents in the lee of two vans and got chatting to their inhabitants Bob, Geoff, Jill and Joan from near Murwillumbah, as well as a South African cyclist nearing the end of his world trip. We had mentioned to the nomads that it was Jan’s birthday and after dinner they invited us in for champagne and chocolate!

The actual Nullarbor Plain is not wide at the highway and we arrived the next day.

The western end of the Nullarbor Plain; we never did see the eastern end sign

With nods to the few bikies outside Nullarbor roadhouse we headed inside. It was only then that we realised they were the advance party of the Rebels riding from Melbourne to Perth. This was the least friendly roadhouse we encountered – same experience as other riders.

The roadhouse was buzzing as staff rushed around preparing for 300 riders and hundreds more in their entourage so we ate quickly, bought 7.5L of water ($33) and hit the road. Soon, the flashing lights of the police escort announced the main group thundering down the road but the bikes, police and support vehicles were spread over kilometres. The riders didn’t wave but a few of the support crew did.

The road turned hilly late in the day and the wind swung around, sapping the strength under a fair load of water but we found a lovely sandy campsite off the road.

Bush camping between Nullarbor and Yalata.

Next morning near the closed Yalata roadhouse we found a grid at the 285 km post, the first fence since the Hyden-Norseman Road and a fast wide (but brief) shoulder. And then an Elders sign advertising Nundroo Station for sale. Expressions of interest closed in April but you can probably still snap it up if interested.

Nundroo roadhouse had little to eat; the Rebels had swarmed like locusts the previous day and apparently don’t like icy poles and liquorice, which was about all that was left. The roadhouse doesn’t open the café until 6pm so we ate lunch on the dusty cement forecourt in the sun.

We were slightly surprised to see two roadies roll in – #notbeachroad – but all became clear when their well-organised support car arrived. They were on a fund-raising ride for Motor Neurone Disease and we played leapfrog with them for the next few days.

After a few days respite, the road kill also returned around here. Life and death returns with more productive land, fences, crops and signs of civilisation.

We bush-camped about 25 km east of Nundroo – off the highway but surrounded by shrubs and stars and little else.  After nights like that, I really felt the serenity shattered by the first businesslike ‘truck up/truck back’ call of the day. 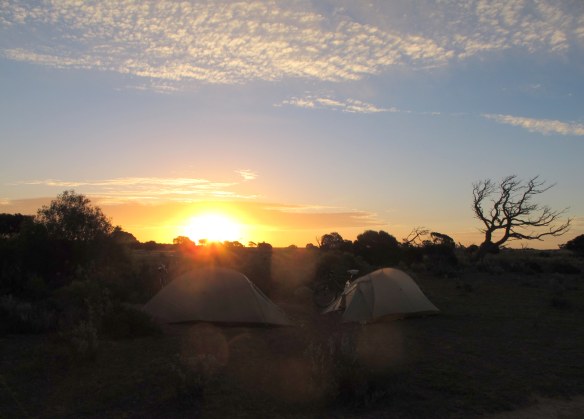 Another bush camp; why would you want to be anywhere else

That left a comfortable 127 km into Ceduna the following day. Hankering for fresh fruit at times, I’d thought about Ceduna and its quarantine station many times. Eastbound travellers have to declare fresh produce and I’d imagined standing in front of the quarantine bin swallowing discarded fruit like a seagull catching chips.

It didn’t happen. We had the usual wind that day and the worst flies I’ve ever experienced that day – truly, unbelievably dreadful. So we were running behind schedule to reach Ceduna post office for our final food parcel by 5pm. Thus at quarantine, instead of gorging on fruit I was sprinting for the post office on a loaded tourer.

I arrived at 5:01 and fortunately the guys loading the truck asked Post Office Phil if he could help. Thank you Phil!

We had a lovely cabin at the Big 4 caravan park in Ceduna – I think they took pity on us, or at least didn’t inhale given that we’d been wild camping a few days.

After showers, a dinner of King George Whiting and chips and a drink at the pub for my birthday, we were definitely back in civilisation. But sorry to leave the remote country behind.